Next year Kia is set to bring a newly updated Sportage model to the road, and snapshots of the car testing in winter conditions have been posted online. The new car will receive changes to its design and bodywork features, and the vehicle will also feature a range of updated engines compared to that of the current vehicle on the road. 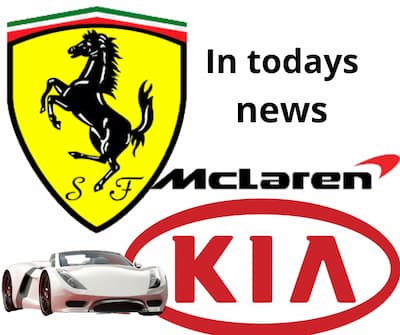 This new edition is a crossover variant of the car, which has been on sale since 1993, with the latest third-generation model going on sale in 2010. The new crossover has taken some styling designs from the brand's KX3 concept vehicle, with the same grille and headlight design being carried over. When spotted, the car was disguised, so some features are still left to the imagination.

Both diesel and petrol engines will be available with the vehicle but are said to be updated compared to the current batch. Kia will also offer a turbocharged engine in the lineup.

The company has not revealed much else about the car but says that it will come with "a host of new additions and improvements."

The new Sportage is expected to make its official debut sometime next year. More information will likely be released closer to the car's launch. Are you looking forward to the updated Sportage? Let us know in the comments below.

A revised Ferrari FF is on the way

Today, sports car maker Ferrari is another company in the news concerning changes to some of their most popular models.

The FF model will be the next car in line next year to receive some changes. The changes made to the car will mainly consist of the technical side of things with more power and alterations made to the chassis of the FF.

The Italians have also included a new eight-speed transmission with the car. The new power rate for the vehicle has not been announced yet, but it is expected to be a significant rise. The only changes that Ferrari has brought to the design of this beautiful car are that they have made the air intakes and the grille slightly larger than what they were before.

Ferrari has yet to reveal anything about changes inside the car, but we expect Ferrari to do something. Expect more to be announced by the sports car brand throughout this year.

Ferrari fans will surely love the new changes coming to the Ferrari FF.

McLaren has announced that the new sports car they have been producing is called the 675LT, and they will display it for the first time at this year's Geneva Motor Show.

On an exciting note, McLaren has stated that the car's name is that the 675 is the vehicle's overall power, therefore being more powerful than the 650S.

So far, no revealing images have been shown about the car's appearance. The only pictures display the car in prototype form being tested under disguise. The key focal point of the 675LT will be its power, and with 675hp produced, you can expect a rather large engine, which is what the new model is likely to deliver with the 3.8-litre V8 unit included.

Information remains quite scarce for the time being, with no price or release yet teased. We will know more when the car is revealed in Geneva.

McLaren has high hopes for the 675LT as they aim to make it "the ultimate McLaren track day car." Stay tuned for more information as it arises.